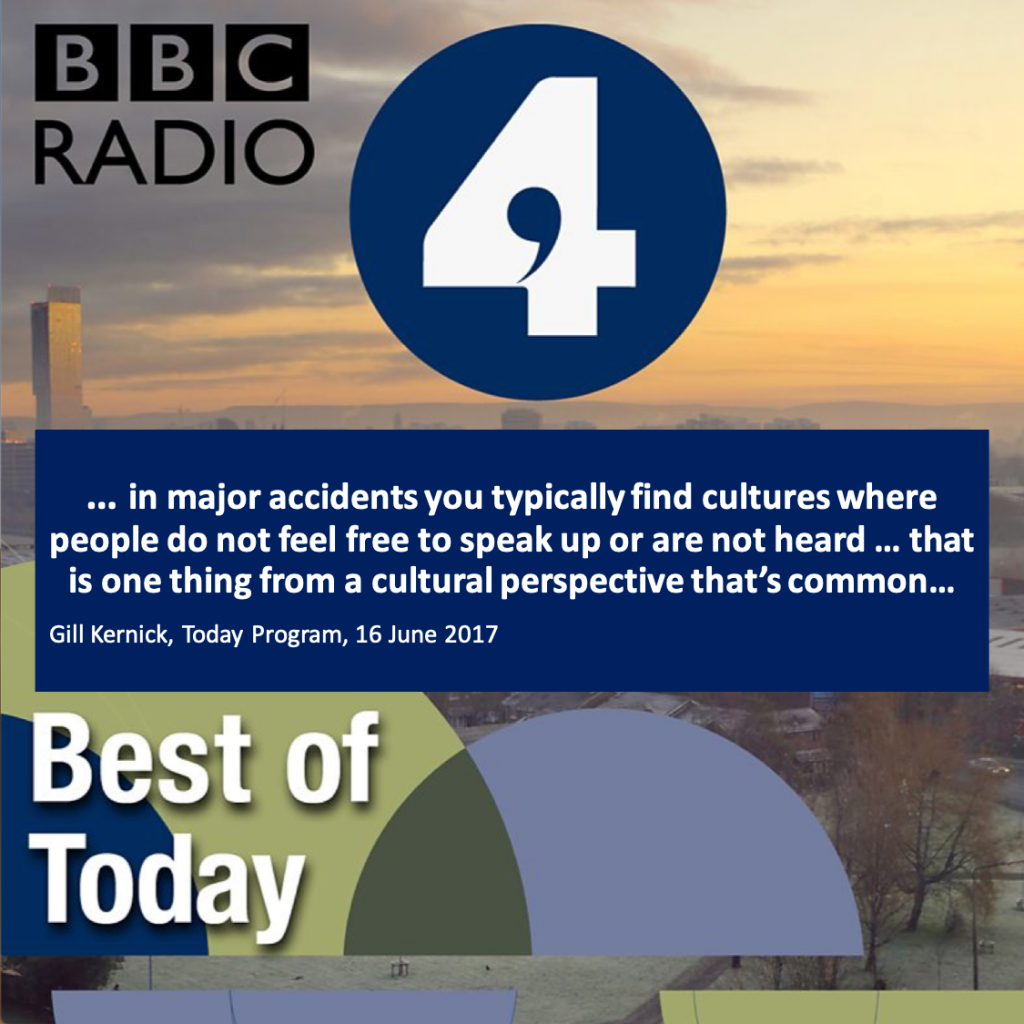 Interview with BBC's Matthew Price after the fire

Two days after the Grenfell Tower Fire I was interviewed on the Today Program. I re-read it yesterday while researching a blog … it was very sobering so thought I’d publish it..

It feels even more prescient today as we hear the emerging story of the awful fire in Barking. Latest reports are that there are no injuries and it appears to have spread via wooden balconies. This building would be excluded from any of the regulatory changes (made or proposed) post-Grenfell. I don’t believe we are dealing with the systemic issues post Grenfell.

Key to this is our continued failure to understand that the tacit knowledge of residents is critical to safety.

Below is a transcript of the interview…. (edits in italics)

Matthew Price (Interviewer) Gill Kernick lived in the tower until a couple of years ago and is with me now.  Some of your former neighbours were in the tower at the time of the fire.

Gill Kernick: Yes, we lived on the 18thfloor [it was in fact the 21st floor after the refurbishment], we know about a couple of families that have gotten out, some have lost children. And there 3 families we don’t know about and it’s heart breaking. [7 people died on the 21st floor].

MP: Of course it is but this is so raw for you

GK: Yes, I was just at the wall at the bottom of the tower where people have been writing notes and it is frankly overwhelming and I don’t know how to contain the emotion.  And every moment there is a new story.  How do you keep letting your heart let that pain in?

MP: And we see the faces of people all around us on pieces of paper. And the face of the 12 year-old girl that has almost become symbolic of those who are missing but, we have to assume that they are not missing that they are not coming back. [The girl referred to is 12 year-old Jessica Urbano Ramirez who died in the fire]

GK: Yes, I think at this point we are looking at a lot of dead people and the pain has really only just started.

MP: How does a community deal with this?

GK: Well I think you said that there is love and anger.  And I’ve been reflecting this morning… I think we have a choice about which side we are going to go with.  The anger only arises because of the love and my hope is that we can stay connected to our love for one another and rebuild this community and ensure that things like this never happen again.

MP:  You were in some of those Residents Associations meetings of the Grenfell Tower. We know that people were expressing their concerns. How do you feel now about the way in which the residents conducted themselves in those meetings? Do you think they did everything they could to get their concerns across?

GK:   … there was one particular meeting I went to which was just where they were talking about the refurbishments. And the residents were very angry. I was a resident at that point, very angry, and in my experience the TMO was really not listening to their concerns. It was a very aggressive meeting. And one of my big regrets is at the time I thought this is not right. And in subsequent interactions with the TMO, because I now live in Trellick (MP  in the nearby tower block) I’ve thought ‘I need to do something, because  this is not right’. The relationship between the management and the residents is not right.

MP  The TMO is the tenancy management organisation which says it is aware of concerns and that at the moment is focused on the immediate needs of people here and will be looking at the long term implications. Your work, you work, you know about large scale disasters, you work in high hazard industries like oil and gas to try and make sure accidents don’t happen. Are there lessons that can be drawn from your work with those oil and gas industries that you think might make sure that an accident like this can’t happen again? What needs to be done?

GK  Yes, I think first, …. it’s been quite difficult looking at this from a professional  perspective as I think there is a lot of lessons that could have been learned that weren’t. I think there’s two that particularly stand out for me. Number one is in major accidents you typically find cultures where people do not feel free to speak up or are not heard and from what we’re hearing there is a clear link to that. The residents were not listened to and were not responded to or taken seriously so I think that is one thing from a cultural perspective that’s common in a lot of major accidents. I think another thing is we have to get beyond the blame to the systemic and cultural and leadership issues that actually led to decisions being made. So if we just end up going, oh well, it’s because of the cladding or it’s because of this, and yes we need to hold people culpable for what they’ve done but there’s broader systemic issues that need to be addressed.

GK  Greater communications, channels of communication, we need to begin to understand what kind of competing tensions people are facing. You know, why did they choose the cheaper cladding not the more expensive cladding? What do you need to do to create a culture and a system that is founded on true care? How do we take care of our people? Not how do we follow rules or save money.

I will continue to use my voice for change to honour those that lost their lives on the 14th June 2017 and for their loved ones who continue to suffer so terribly every day.