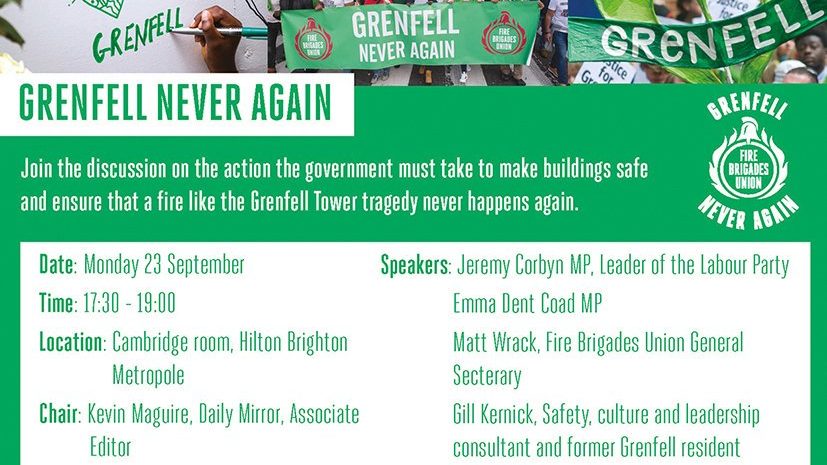 I will always defend firefighters on the ground from being blamed for what happened on the 14th June 2017. Being invited to speak at the Grenfell Never Again event hosted by the Fire Brigade Union at the Labour Party Conference was humbling and a privilege. Following some requests, I’m publishing a (slightly edited) transcript of what I said.

Thanks to Matt Wrack and Emma Dent Coad (MP) for sharing your wisdom and to Kevin McGuire for chairing.

Introduction and a short story…

I am very humbled to be on this panel and want to thank the Fire Brigades Union for the invitation.

By way of introduction … Professionally I partner organisations in high hazard industries to create the leadership capabilities and culture to prevent catastrophic events. From 2011 to 2014 my husband and I rented a beautiful apartment on the 21st floor of Grenfell Tower. We fell in love with high rise living – with the views and community – and in 2014 purchased an apartment in Trellick Tower. Our view is of Grenfell. On the 14th June 2017 we watched it burn, 7 of our former neighbours died. As I watched the fire, I vowed to ensure we learned and to bring the thinking of high hazard industries to the Grenfell conversation.

Let me start by telling you a short story… During the Public Inquiry’s questioning of the firefighters, I was deeply upset by the amount of hindsight bias in the questioning.

“There is almost no human action or decision that cannot be made to look flawed and less sensible in the misleading light of hindsight. It is essential that the critic should keep himself constantly aware of that fact”.

Feeling helpless, I rang the bell at the Kensington fire station, a box of Golborne Road’s famous Portuguese custards tarts in hand… I shoved the box into the hands of the firefighter who opened the door, mumbled something about how upset I was and that I was thinking of them, gave him a hug and left…

I don’t really have the words to express this but I do want you to know that the Grenfell firefighters will always have my heart, my solidarity and my deepest gratitude.

The question I’ve been asked to speak to is – what actions must the government take to make buildings safe and ensure that a fire like the Grenfell Tower tragedy never happens again…  From my perspective there are 4 actions that are currently not getting enough attention.

In all honesty, history tells us we will not learn from Grenfell and we need to confront this learning disability.  The dangers of external fire spread were discussed in Parliament almost 20 years before Grenfell.

What makes us think we will learn from the 72 deaths at Grenfell?

A 2017 Institute for Government publication revealed that there is no process for ensuring recommendations from Inquiries or Inquests are either implemented or effective.  Since 1990, there have been 68 public inquiries in the UK, and only 6 of these had full scrutiny to hold the government to account for what it did with the recommendations. Up to 2017, 639 million had been spent on the inquiries and yet there is no process in place to ensure recommendations implemented or effective!

So fundamentally, at a national level our ‘investigation system’ spends a lot of money coming up with recommendations, the sitting government can then either accept or reject them as they please, and there is no oversight or accountability process for ensuring that recommendations are either implemented or effective.

If we’re serious about preventing another Grenfell we need to establish an independent body to oversee the implementation and effectiveness of recommendations made by public inquiries and inquests and we need to start this with the Grenfell Inquiry.

Grenfell was not an isolated incident. It has revealed fatal failings in the housing and construction industry, in our understanding of risk and particularly the nature of low probability, high consequence events and severe failings in both regulations & regulators. Our buildings are full of materials whose risks are not known or understood. From cladding, to fire doors, to ventilation systems, to wet & dry risers, to missing or incorrectly installed fire breaks …

We are not building safe buildings and don’t appear to have been doing so for decades.

Without confronting and owning how bad things are as the starting point, we stand no chance of preventing the next Grenfell.

It is absolutely inexcusable that 2 ½ years down the line we have not created a transparent national register of fire safety risks.  How can we possibly hope to correct things if we don’t have oversight of what there is to correct?

Arguments against transparency rest in an outdated paternalistic notion that somehow residents or the public cannot cope with the truth.  We have to stop infantilising people – they are not the problem; they are integral to the solution. Would you want to live in a building without knowing the risks you were facing?

The second action the government must take is creating a transparent national register of safety critical risks.  This should start with the data from fire risk assessments in High Rise Buildings.

We need to figure out how to pay for putting things right. There is currently only government funding available for ACM cladding and I’m hearing reports of it being difficult to access.  One large housing group estimates the costs of making its buildings safe at 6.9 billion.  How to resource correcting things needs to be confronted.

It is predictable that large amounts of money will be spent in law courts which will take years to resolve. The very people in the building and construction industry who contributed to the problems we have will make a profit out of fixing things.  An unfair burden will be placed on leaseholders and taxpayers.

Surely the insurance industry, central and local government, the building and construction industry and affected residents could find creative ways of funding repairs and ensure money goes towards fixing things rather than to lawyers or to the bottom line of  large corporations that contributed to the problem in the first place.

We cannot expect fast paced change without confronting how it will be paid for. The government must find a way to resource mitigating and correcting historical failings. The solution must not place an unfair burden on leaseholders and taxpayers.

Transform how we lead.

Much attention is given to technical or structural solutions e.g. sprinklers, alarms, regulations.  These are critical but we must understand that technical solutions alone will never prevent another Grenfell.

Perhaps an additional consequence of the complex socio technical world we live in is that we should stop relying on official Inquiries to tell us the ‘root cause’, we should stop relying on the expertise of lawyers closeted in rooms for years to tell us what went wrong.  We should start holding a mirror up to ourselves and start asking some uncomfortable questions about our own leadership, the culture we are creating and operating in and the agendas and biases influencing our decision making.

Perhaps then we will begin to learn…

These are all challenges of leadership.  We need to engage and enquire into the kind of leadership that will prevent another Grenfell.

We need to learn how to lead.  Without transforming our leadership, we will not prevent another Grenfell.

I remember doing an interview for the Today Program just after the fire and talking about their being a choice in how we responded.  Either the response would entrench existing views and divides, or it would create a new narrative.  Of unity and togetherness.  Of humanity.

There are two pictures I have in my head.

Ultimately Grenfell has entrenched existing views rather than enabled a new narrative. A narrative of love of unity and humanity. For me, this is the biggest failing of Grenfell and this is a failure of leadership, and we are all culpable. This last week has shown political leaders from all parties displaying behaviours opposed to learning and enquiry, to humanity and compassion, to listening and decency. We stand no chance of preventing the next Grenfell without fundamentally altering how our political leaders behave. Without fundamentally transforming how we lead. And this needs to start with looking in the mirror before pointing fingers at others.

The fourth action, for all politicians, is to look long and hard in the mirror and confront how their leadership (or more accurately lack of it) has contributed to Grenfell. Without transforming how our politicians lead we stand no chance of preventing another Grenfell.

The following is a LinkedIn thread where as part of my preparation I asked what I should say. It has some useful ideas. Two stood out to me:

Grenfell was a human tragedy and yet that seems to be getting lost amongst all the product and process oriented discussions. I know from personal experience and my research just how important and necessary it is to put the public at the heart if service design. So, my plea, is to demand a human and humane revolution in how we manage risk. Use the best experts and expertise to support, and not bypass, the public. They are an asset and not a liability.

When good people do nothing bad things happen

The FBU published it’s booklet : The Grenfell Tower fire: a crime of profit and deregulation. It has incredibly useful information about the context and multiple failed opportunities to learn.

The Grenfell Tower Fire A crime caused by profit and deregulation.Download

The following is a short article about the broader discussion at the event.