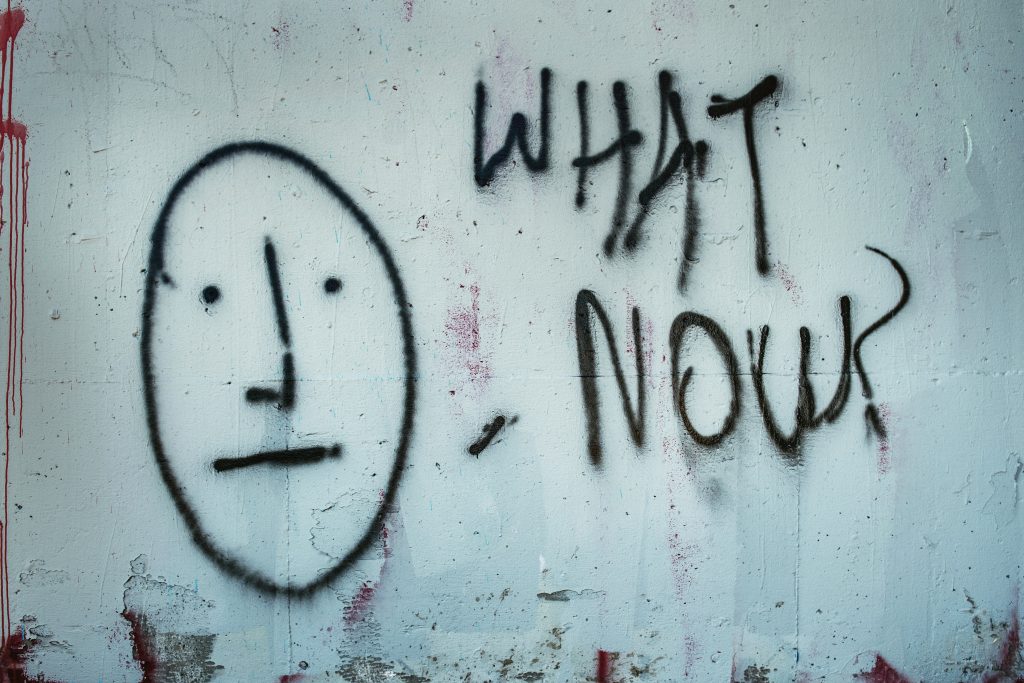 This blog explores the Cummings’ crisis through the lens of a failure to attend to and restore an unwritten psychological contract in the aftermath of catastrophic events.

Cummings unprecedented ‘Rose Garden’ interview failed to resolve questions about his trip or silence calls for his resignation.  The country is caught up in an intractable ‘right/wrong’ narrative, fuelled by politicians, the media and the public alike. Any path forward now feeds into this and will likely further polarise at a time when hundreds are still dying daily. The path out of lockdown will be difficult enough without the added issue of a fundamental loss of trust in government.

A YouGov poll shows the Tory lead over Labour falling 15 pts to 6 pts in less than a week. The tone of the conversation is polarising, from the ‘witness statement style and content’ of Cummings statement to the Prime Minister’s calls to ‘move on’.

The issue is no longer about the legality of Cummings’ actions, it’s about perceptions of ‘one rule for them and another for us’; it’s about a loss of trust with those in power. It has as much to do with the response as with the act itself.  Continuing to engage in divisive narratives or justifying actions will simply entrench existing views and increase distrust.

Rather than focus on the event itself, asking how we could restore our unwritten psychological contract and build trust might offer some different perspectives.

We all have a psychological contract with those in power, although intangible, it can be more influential than formal rules.

In Cambridge University’s Bennett Institute report on Policy Lessons from Catastrophic Events I argue that in the wake of tragic events, those in power have an accountability for attending to and restoring this psychological contract. Failure to accept and act on this accountability leads to increasing levels of mistrust.

I lived on the 21st floor of Grenfell Tower from 2011 to 2014 and watched it burn. Seven of my former neighbours died.  Based on my own experience of the psychological contract being broken, and the resultant lack of trust I experience with those in power, there is an immediate opportunity (and need) for those in power to move away from polarising narratives and consider how they might restore this contract and rebuild trust.

This won’t be accomplished by trawling over the incident or by simply ‘moving on’.  It will require humble and courageous leadership, which, in the face of catastrophic events is often lacking. For example, Theresa May’s private visit to Grenfell the day after the fire, when she failed to meet Grenfell survivors or bereaved.  Or Matt Hancock’s warnings to the NHS to not overuse PPE.  By contrast Jacinda Ardern, the Prime Minister of New Zealand, clearly understands her accountability for tending to the psychological contract as demonstrated both by her response to COVID-19 and the 2019 Christchurch terrorist attack.

What is interesting in the case of Cummings is that our psychological contract is not with him.  As an advisor to the Prime Minister, he has no accountability to the public. The Institute for Government’s, Jill Rutter pointed out in a prescient video more than four months ago that ‘when he (Cummings) causes mayhem, Johnson has to accept responsibility. Cummings has zero authority. Johnson is 100% accountable.’

So, whilst much anger is being directed at Cummings, we should be clear that he is an unelected official and Johnson is accountable and answerable for Cummings past and future actions.

From this perspective, the questions I would be asking the Prime Minister are:

These questions would have us focus on the processes of accountabilities that were either missing or not followed and be directed to the person accountable to us for Cummings’ actions. They would move beyond personal attack and outrage to understanding the systemic issues at play.

Whilst being accountable for the psychological contract may fly in the face of how career politicians view their job and would require a fundamental shift in thinking, doing so would focus attention on restoring trust, which is key if we’re to successfully navigate the next months of the pandemic.

Restoring the psychological contract would require

Practicing radical transparency might seem counterintuitive but is what is required. Continued attempts at spin and deflecting the issue will increase distrust.

A willingness by the Prime Minister to accept responsibility not because it’s his fault ‘but because it happened on his watch’ would go some way to easing tensions.  Fronting Cummings is deferring accountability where it doesn’t lie.   Excuses, justifications and ‘moving on’ don’t equate with accepting responsibility. This is now about trust and our perceptions, it’s not about the cross-country trip.

Systemic issues that the situation reveals need to be corrected swiftly. At the moment we’re not dealing with this. We’ve displaced accountability from Johnson to Cummings – this is Johnson’s mess to correct. We need to understand what accountability structures were missing and hold Johnson to account for correcting them, so something like this cannot happen again, either with Cummings or anyone else.

The country is grieving. Over 37,000 people have died. Those at the sharp end of the pandemic have witnessed and dealt with the unimaginable. The context for Cummings actions is a catastrophe (a long and drawn out one) and hundreds of thousands are bereaved. These are not normal times.

Ministers would be well advised to read ‘The patronising disposition of Unaccountable Power: A report to ensure the pain and suffering of the Hillsborough families is not repeated’.  It describes a culture and mindset that instinctively prioritises reputation over the citizen’s right to expect people to be held to account for their actions.

To restore trust, perceived imbalances in where consequences are borne needs to be addressed.  Calls for Cummings’ resignation, at an emotional level, are an attempt to do this.   History tells us that failing to do so will lead to increased activism and calls for justice. For example, Grenfell United, Doreen Lawrence and the Hillsborough families. The pain and anger of the bereaved is inconsolable.  People do not simply ‘move on.

Data suggests that the response in the UK has not been as effective as in other countries.

Those impacted by tragedies want to ensure that others do not endure what they have.  A key part to restoring the psychological contract is learning.  Hanan Wahabi escaped from Grenfell Tower and watched as her brother, his wife and three children died.  During evidence at the Grenfell Inquiry, she said

… Saying they would do nothing differently cannot be an acceptable response if we are serious about learning.

72 people passed away and we can’t bring our loved ones back. The impact it’s had on our families and our community could have been prevented.  We can’t change that now, but we can make the lives of those we’ve lost to count, for their deaths not to have been in vain.  There has to be change. We have to learn from this. … I want the truth to be found and for change to happen.’

The failure to call an Inquiry into either Cummings specifically or the government’s response to COVID-19 more broadly, calls into question the commitment to learning.

We are in the midst of a catastrophic event. I have some experience of this after 72 people died at Grenfell. The impact of 40,000 deaths is unimaginable.

Our leaders do not have a good track record of responding well to those impacted by disasters. Ministers and their staff signing up to and operating consistent with the ‘Charter for Families Bereaved through Public Tragedy’ would be a good starting point.

This is not simply a political issue. We need to view Cummings’ actions and the governments response in the context of collective grief. We need to understand that calls to ‘move on’ land on ears who who could not hear final words from those they lost. We can’t simply ‘move on’.

People talk too loosely about closure. They fail to realise that there can be no closure to love, nor should there be for someone you have loved and lost. Furthermore, grief is a journey without a destination. The bereaved travel through a landscape of memories and thoughts of what might have been. It is a journey marked by milestones, some you seek, some you stumble on. For the families and survivors of Hillsborough these milestones have included the search for truth, accountability and justice. But even these are not the end of the road. They are still travelling.

The Patronising Disposition of Unaccountable Power: A report to ensure the suffering of the Hillsborough families is not repeated. (p.3) The Right Reverend James Jones KBE.

Rather than asking ‘how can we ‘move on’ from the Cummings’ crisis?’ those in power might instead seek to understand what a country in grief needs from them, to understand what it would take to restore the psychological contract and build trust.

My thoughts on power and the psychological contract were first published in Cambridge University’s Bennett Institute report on Policy Lessons from Catastrophic Events.

Leave a Reply to The Dominic Cummings affair has much more in common with Hillsborough and Grenfell Tower than with politics. | ukcivilservant Cancel reply